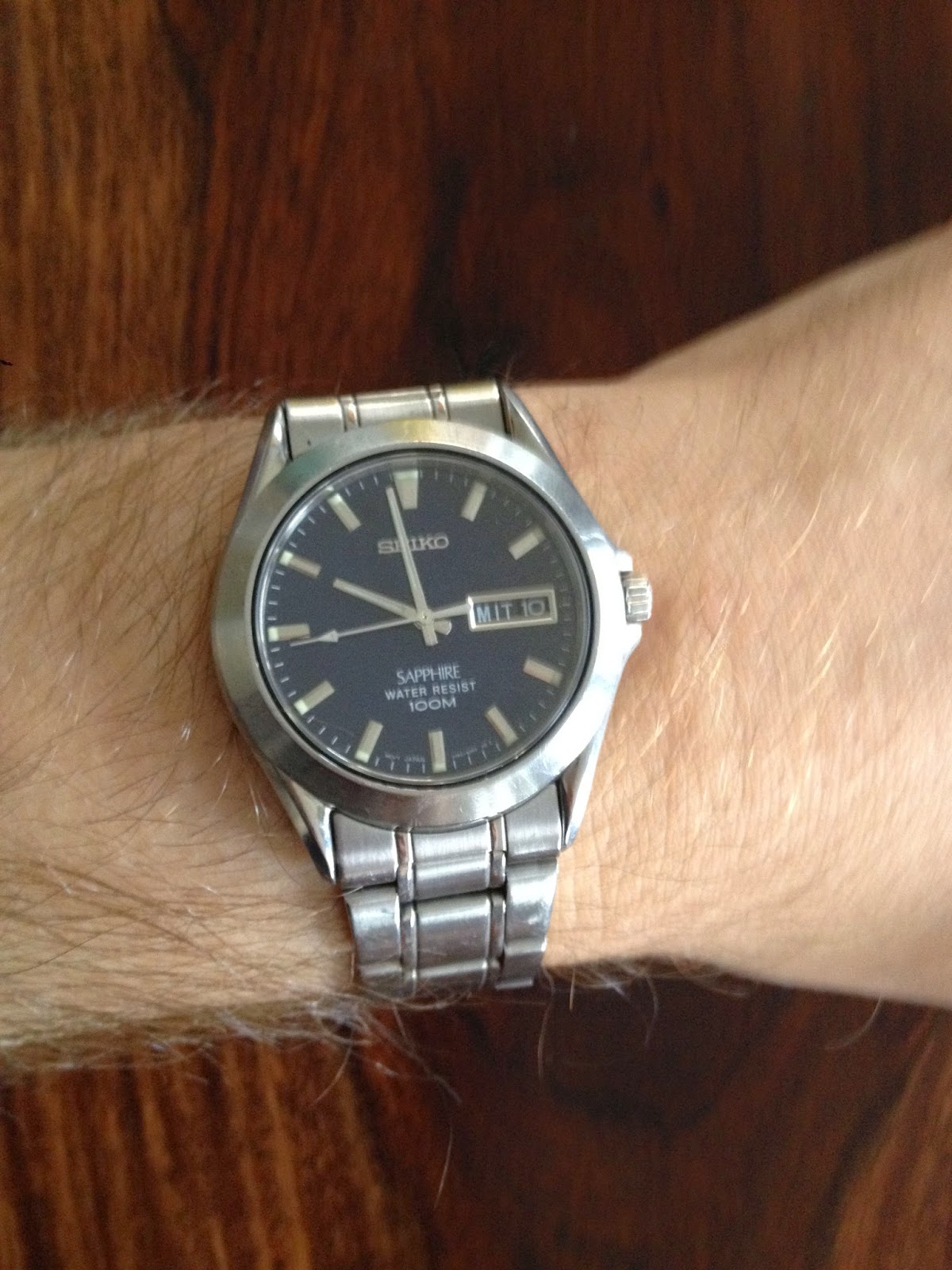 This changes nothing - again!

How iTunes Match does (or does not) sync Video Playlists to iPhone, iPod, and iPad

When Apple first introduced iTunes Match in 2011, everyone was excited: Eventually there was an easy way of getting all those iTunes media files to synchronize between all your Macs, PCs, iPhones, iPods, and iPads seamlessly via iCloud! But after a few days of using it it became obvious that there were some very annoying drawbacks and restrictions. And many of them do still exist today.

iTunes Match works best when used with music files (audio and music videos) purchased at Apples iTunes Store. It does not feel quite as comfortable with oder media kinds, especially videos. It works even worse with playlists. And it (almost) refuses to operate on media not available from the iTunes Store.

So the ultimate challenge for the media enthusiast these days is to get this playlist of home videos synced from iTunes to the iPhone via iCloud! And I will try to show you in this post how this can be achieved.

So lets start with the facts I found out during my research about playlists and videos in the realm of iTunes Match and iCloud. All these findings are based on iTunes 12.1 on OS X Yosemite and iOS 8.1.3 on iPod Touch 5g. There's no warranty that all or only some of these findings can be reproduced by everyone with the same or different hardware and software configuration:

You can check which media types iTunes Match will sync in your country at all. And somewhere in the F.A.Q-section of this page you will find the statement, that "playlists with videos, voice memos, or PDF files will not sync."
That's it! And it's not even half of the truth, as we will see later.

Finding 2: iTunes Match behaves different on an iOS device and on iTunes

When you turn on iTunes Match in iTunes on your PC or Mac, it is still possible to select videos and playlists for local synchronization to your iOS device. iTunes will even try to tell you that these playlists are there: 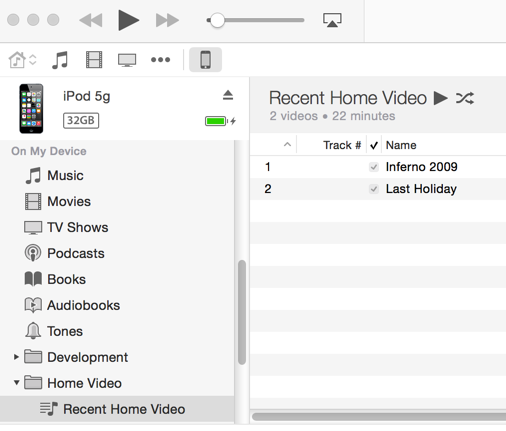 When the cloud symbol is struck through, the item is not on iCloud.

Short side note: Everything just said above is not true for Music and Music Videos. These cannot be synced manually when iTunes Match is turned on on your iOS device:

Finding 4: iTunes Match will only sync media available from the iTunes Store

You will only get your media files into iCloud, if the iTunes Store offers them for sale in your country. It doesn't matter whether you purchased them from Apple or not. When iTunes Match is turned on, your media library will be scanned and iTunes tries to match each of your media files with the Store. It is Apple's secret how a match would be recognized. But you can definitely say that there is no chance to ever get any of your home made videos into iCloud. You will have to sync all of these files locally from your computer to your iOS device.
Whether a playlist is synced to iCloud depends on the playlist type and sync status of the items it contains. Details will be discussed in Finding 7.

Finding 5: It's cumbersome to check your iOS device for playlists synced to it 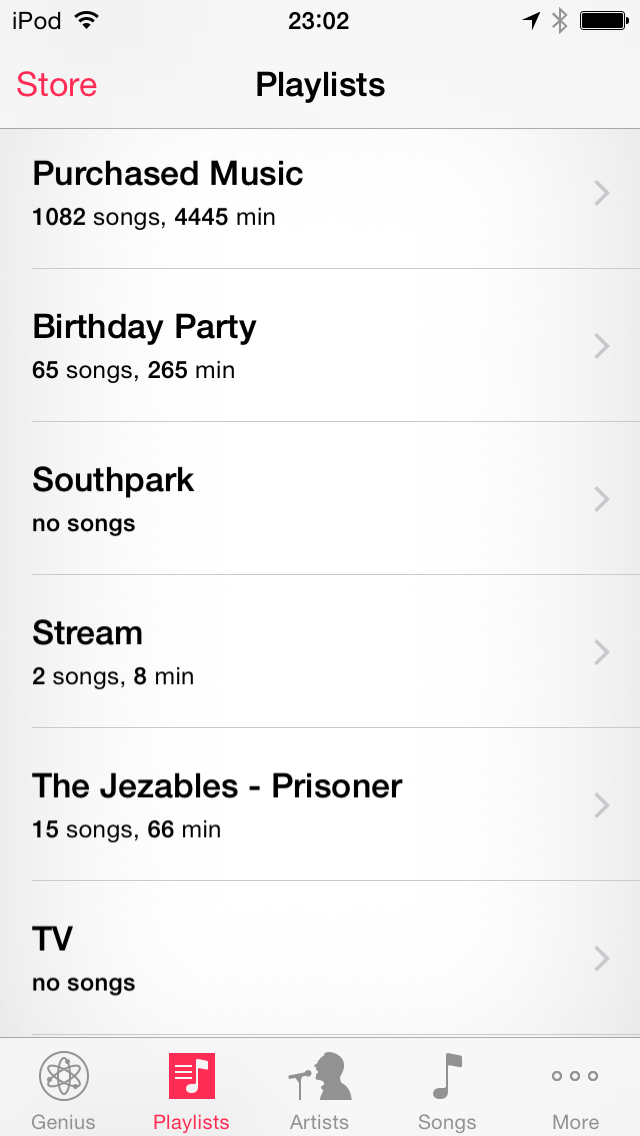 Use Joobik Player to view the content of all playlists and play them on your iPhone, iPod, or iPad: 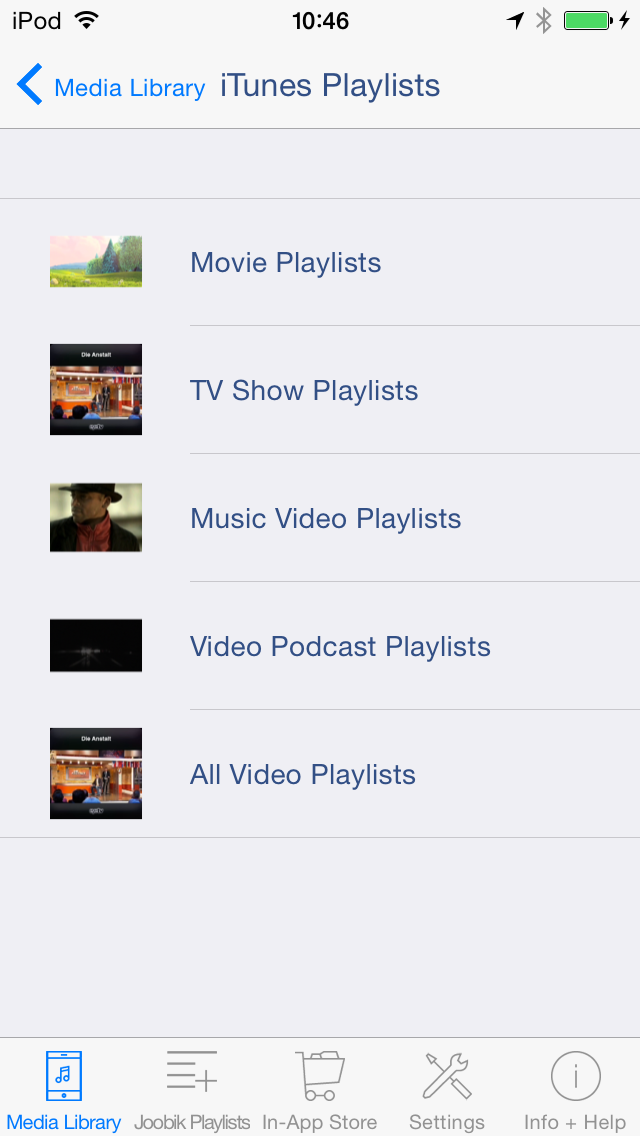 In order for a playlist to appear in Joobik Player, the playlist itself must be synced to iCloud, but the media files must reside physically on your iOS device. I.e. if a playlist contains items from iCloud, at least one of these items must be downloaded from the cloud to your device using the native iOS Video or Music App. If a playlist contains items not available from iCloud, these items must be synced locally from iTunes to your iOS device. Detailed instructions on how to do this are given at the end of this post.

When I turned on again iTunes Match on my iPod after several months of using only local synchronization, I was surprised to see appear several playlist that where not on my iTunes-Match-enabled Mac. The only explanation I see for this behaviour is that these lists must originate from an old computer, which I don't own anymore. So iTunes Match becomes even more confusing, when more than one Computer is involved in the synchronization pool. But this might be a topic for another blog post..

Putting it all toghether

When it's about music and music videos, you will depend on Apple's grace: Either they sync to iCloud or they don't. But all other media types can be tweaked by mixing iCloud Smart Playlists with files synchronized locally:

Create a smart playlist that syncs to iCloud as described in Finding 7. If you cannot find smart rules sufficient to group all desired tracks into one smart list, just create an ordinary playlist containing these tracks and add an unique tag to the comments field (or any other meta data field) of each of the tracks on this list: 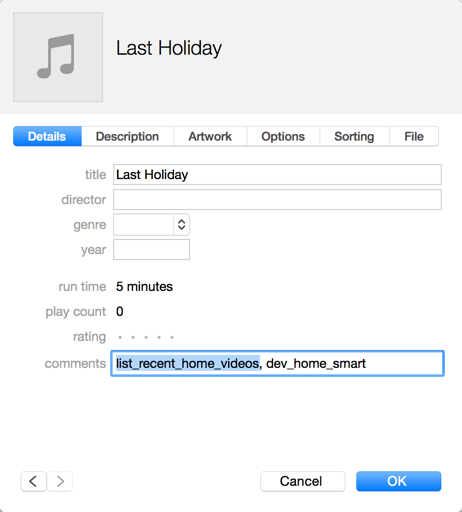 Now the Smart Playlist itself will sync to iCloud, while the tracks will not:

Sync the Smart Playlist locally from iTunes to your iOS device:

Play the playlist with Joobik Player: 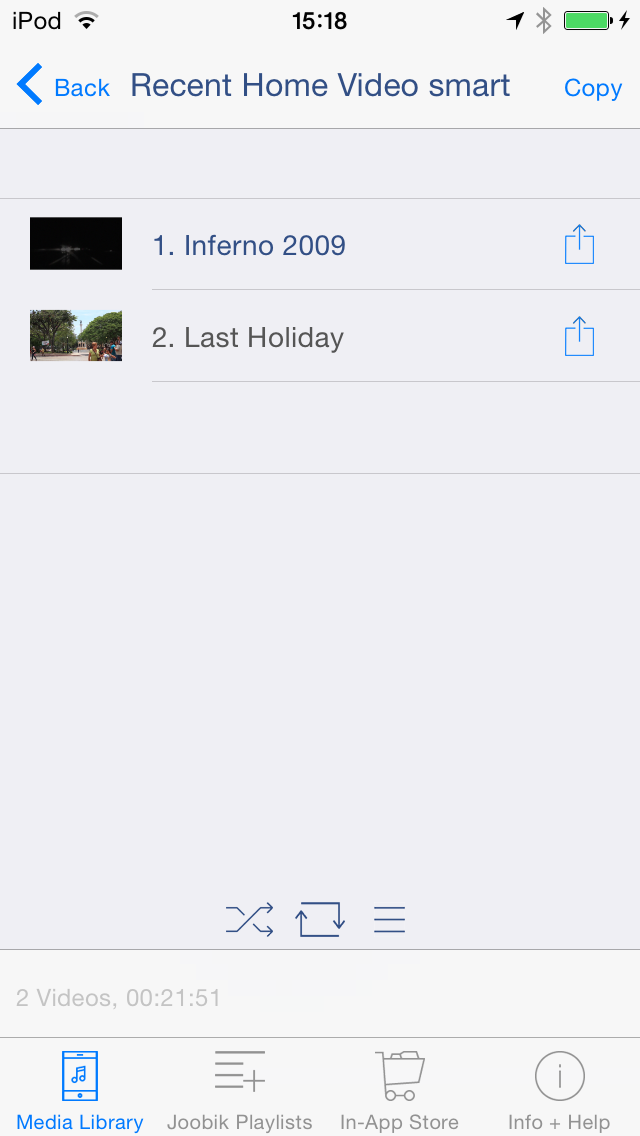 If you want to modify the iTunes Playlist on your iPhone or iPad, just copy it to a Joobik Playlist. With Joobik Playlists you can add, remove, and rearrange tracks.